I got a glimpse today !! Bertha's got backbone

Richie relented and opened the door to Bertha's sanctum deep in the heart of the 4x4lrs workshops. Camera-less I couldn't take a quick paparazzi type scoop snap so had to rely on staying around the workshop so he couldnt get anywork done until he relented and promised to e-mail me something..

So when a new mail tonight arrived I eagerly opened it expected something close to the vision I had seen earlier - and this is what I got.. 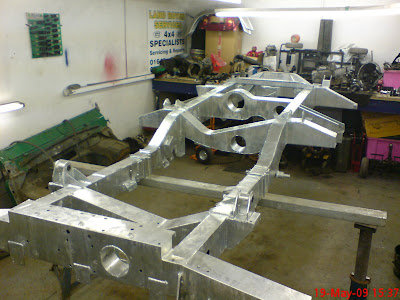 Now its very nice and pristine, a true testament to the engineers who built it, but what lays behind those locked doors at the workshop, no longer looks like that, Its prepped prepared, painted and in some of the important bits nearly has axles and wheels added.

I say nearly because obtaining new front leaf springs hasnt been easy, In fact it has been holding up things a fair bit. But thankfully some had been sourced and where due delivery Mid week in plenty of time to get the axles offered up to the chassis before today.

Except.. they havent shown up yet - so what I did sneak a peak at was a Chassis with wheels placed underneath in roughly the right place !! Also In the workshop was the replacement engine, a diesel circa 1970, this still needs stripping, refurb and thorough testing.

Nice site - good to see another restoration is being blogged! Check out mine at http://www.series2rebuild.net