is not always good news..Approaching 2 years since we started this "6 month" project Bertha is still in bits, and  while respraying is underway  she is still a while off seeing the open road again.

Doris the Disco is performing well  but not entirely without problems.. 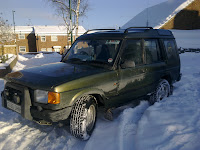 Over the winter she worked hard in the deep snow we had around here, and has managed a few  trips  down to London with few issues
One trip was called  off when the brakes decided not to slow her down, a tad nervewracking in the fast lane of the A1 , a new vaccuum pump soon sorted out that slight  issue and a change of underwear made the driver more comfortable. 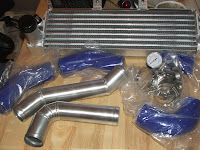 A new lift pump and 2nd phase intercooler has helped with the rather lethargic attitude Doris has to motoring, as has removing the EGR, and Catalytic converter. Front valance has gone and end caps trimmed to allow for a robust steering guard.  and the diffs are covered in body armour .


Also to go were the  rear road tyres she came with, replaced by a couple of Avon rangers A/T's  not over impressed as they are wearing a bit quick for my liking, the BF Goodrichs on the front seem like they will go on for ever

Also replaced are a couple of indicator lenses and a headlight trimmer panel  that were adjusted slightly by driver error .
Plans for this month are to get at the transfer box and either replace or repair as she no longer wants to  difflock.  both the the throttle position sensor and the air flow sensor are showing faults on the diagnostic,  so the hunt is on for cheap replacements.
Hopefully my next entry will not take as long as this has has to publish, and will be back on topic, after all this blog is supposed to be about Bertha not Doris
Posted by Rikki & Lucy at 09:52