We have, hens teeth, this little darling is a life saver 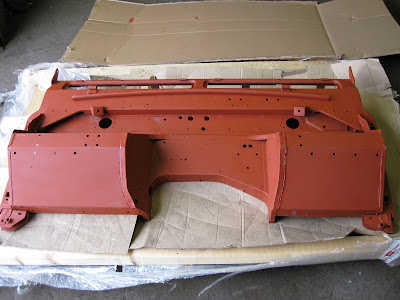 Sourcing this was a stroke of luck, good timing , and an outlay of a decent amount of cash. Its not perfect and needs a couple of minor modifications, but the time, effort and swearing has been significantly reduced by obtaining these rather than trying to fabricate and weld the old one

YES we have a solid complete bulkhead, unfortunatly the rest of Bertha is either in bits in boxes or in the process of being dismantled. the chassis is now "resting" while Richie at 4x4lrs decides wether to restore it for someone else, take the useable bits for his own restoration project "Katie" or let it continue to be used as a convenient coffee table.

Our new chassis is on order but before that arrives there is a couple of small issues , well a lot more than a coiple to be honest. but the ones we are looking at now, The gearbox, (for those of you who havent been paying attention, we were surprised to find Bertha's box was even older than the rest of her, dating from 1959) has been stripped down, 2nd gear, to use what I am told are technical terms, is knackered, shagged, kaput !! so now the hunt is on for the parts needed.

The Overdrive.. well we dont have one, but we want one, but prices for decent examples are silly, we may just have to forgo that extravagance as our cash supply isnt endless.

And the engine.. Having decided to change Bertha back to an oil burner, we now have to decide if we go for the earlier close to original date version, which had a worrying tendancy to chew up and spit out the crankshaft, or go for a 2 year older version which is less prone to such expensive displays, Only a total rivet counter would probably notice the difference in age between Bertha and her engine, our feeling is that we have got a few years in credit by using the older gearbox so can trade that off with a "modern" 1970 variant.

Project Bertha was never about restoring to historical accuracy, but reflecting her life, over the years she has become a "Bitsa" as things broke they were replaced with whatever was handy, Bitsa this and Bitsa that and part of the joy of this restoration is that we can continue that rich history.