4x4LRS after a hectic week or so stripping down are getting to the more detailed slower stages.

It is a few weeks until the new chassis arrives which gives time to start refurbishing and repairing those bits of Bertha that are not getting replaced. This probably wont make enthralling blog reading, although I will update as Bertha continues to throw up surprises.

One major surprise has been the sourcing of a fully refurbished series 2A bulkhead. This will save a awful lot of time and work on the rebuild. although it made a sizable dent in the budget.
Pic's to follow

At least Bertha will not be lonely, on a trip to view an age related series diesel engine for Bertha Richie at 4x4LRS came back with not one, but two engines, nestled sweetly in the back of a swb series 2A that he intends to be another restoration project. 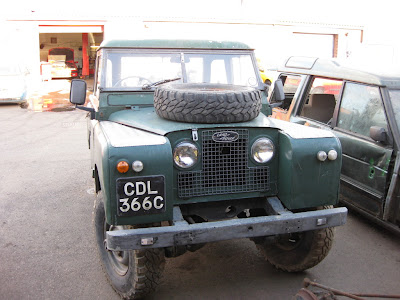